SAD NEW YEAR AS MELINDO LOSES TITLE; OUR CHOICE OF THE BEST IN PHILIPPINE BOXING 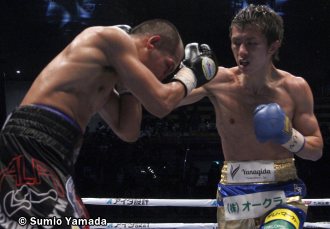 It was a sad New Year for Milan Melindo as he failed in his pursuit to unify all the junior flyweight championship belts as he endured a unanimous decision defeat to Ryoichi Taguchi last night at the Ota-City General Gymnasium in Tokyo, Japan. Taguchi (27-2-2, 12 KOs) annexed the IBF junior flyweight belt to his WBA strap as he successfully defended it for the seventh time. Taguchi won the verdict 117-111 twice and 116-111 on the third. He also conquered the vacant Ring junior flyweight title with the triumph.

The 29-year-old Melindo (37-3, 13 KOs) commanded the earlier rounds, delivered blows to the body of the Japanese champ and was so effective with his jabs. But it was a repeat of the split-decision win over South African Hekkie Budler last September, where cuts affected Melindo’s performance, as blood kept flowing from his wounds above both eyes.

Taguchi affirmed his mastery in the next rounds as Melindo was disturbed by a cut over his left eye in the third. The ALA Gym boxer began to slow down, which Taguchi exploited Melindo’s waning offense to penetrate with his blows invading the Filipino’s vulnerable defense.

Another bang of heads cut Melindo this time over his right eye in the sixth round. This paved the way for the 31-year-old Taguchi in controlling the succeeding rounds. Melindo momentarily recovered in the ninth, sending jabs and connecting punches to the body. In the heat of the action, their heads clashed again, this time it was Taguchi’s forehead which was gashed. Melindo took advantage of the Japanese’s losing focus as he shoved him with blows to the body and head. 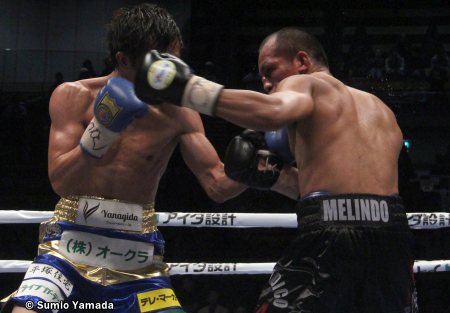 Milan Melindo connects with a left on Ryoichi Taguchi during their unification fight Sunday night in Tokyo, Japan. 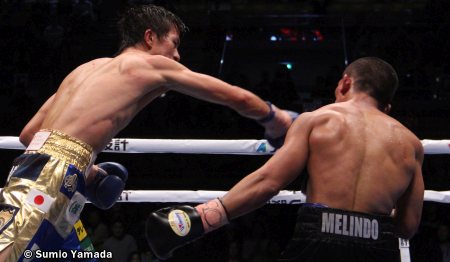 A hard right by Taguchi lands on Melindo’s face.

Taguchi regained strength in the next stanza and sent flurry of blows as Melindo began to show signs of exhaustion. Twelfth round was even bloodier as their heads again collided dripping more blood above Melindo’s right eye, which the doctor examined more than a minute left of the fight.

“The end was good for me,” said Taguchi “It was brutal.” He was elated with his dreams coming true as he told Kyodo News. “When I started boxing, I dreamed of being a world champ, of defending my title seven times and winning a unification fight. So this is pretty great.”

“We lost to a better fighter last night,” said Edito Villamor, the head coach of ALA Boxing Gym fighters in his Twitter. “It was a great fight,” he added. In the past year 2017, Melindo finally became a world champion on a one-round knockout of Japan’s Akira Yaegashi in Tokyo. He defended it once in Cebu against Buddler. But on the yearend he lost it to the better fighter.

Melindo’s goal was to unite all the belts in the junior flyweight division. But it is now Ryoichi Taguchi who has unified the WBA and IBF straps. The WBC champion is fellow Japanese Ken Shiro (12–0–0, 6 KOs) while the WBO champion is Angel Acosta (17–1–0, 17 KOs) of Puerto Rico.

The Philippines is now left with two current world champions, IBF junior bantamweight titlist Jerwin Ancajas and IBF flyweight king Donnie Nietes. Ancajas will make his U.S. debut on Februay 3 and he will fight Israel Gonzalez of Mexico in Texas. Nietes will defend his title against Juan Carlos Reveco of Argentina with the location and date still to be determined.

Our hands down choice for Philippine Boxing Fighter of the Year is IBF world super flyweight champion Jerwin Ancajas. On January 29, he stopped Jose Alfredo Rodriguez of Mexico in round seven in Macau, China. On July 2, Ancajas won by 7th round TKO of Teiru Kinoshita of Japan in the Manny Pacquiao-Jeff Horn undercard in Suncorp Stadium, Brisbane, Australia. On Noveember 18, he triumphed over Irishman Jamie Conlan by 6th round TKO in SSE Arena, Belfast, Northern Ireland.

Our Most Promising Fighter is ALA Gym standout Mark “Magnifico” Magsayo who dominated Shota Hayashi of Japan by UD on November 25 at Tagbilaran City, Bohol to retain his WBO international featherweight title. He also destroyed Daniel Diaz of Nicaragua by first round TKO on July 8 at the IEC Convention Center, Cebu City and Issa Nampepeche of Tanzania also in one round on April 29 at Waterfront Hotel & Casino, Cebu City.

The Upset of the Year was the victory of Jonas Sultan winning by UD in 12 rounds over the favorite Johnriel Casimero, as Sultan defeats and upsets the former two-division world champion in an IBF super flyweight title eliminator, Waterfront Cebu City Hotel, Cebu City.

For the Knockout of the Year, Milan Melindo decked Akira Yaegashi three times in the first round before referee Eddie Hernandez stopped the mismatch at the 2:45 mark to win the IBF junior flyweight title at the Ariake Colosseum in Tokyo, Japan on May 21. The ALA boxing star first knocked down the former champion with a counter left hook to the temple. Melindo landed a left uppercut that dropped Yaegashi again. A fast right straight to the head sent the Japanese to the canvas the third time which prompted the referee to stop the fight.

The Philippine Boxing Newsmaker of the Year is still Senator Manny Pacquiao. He was beaten by Jeff Horn in Brisbane, Australia by a highly controversial unanimous decision last July 2. He hit the headlines and went viral in social media when he tweeted Conor McGregor hinting a possible fight in the ring. And again gained worldwide attention when he was endorsed by no less than fellow Mindanaoan President Rodrigo Roa Duterte as the next president during his 39th birthday last December 17.