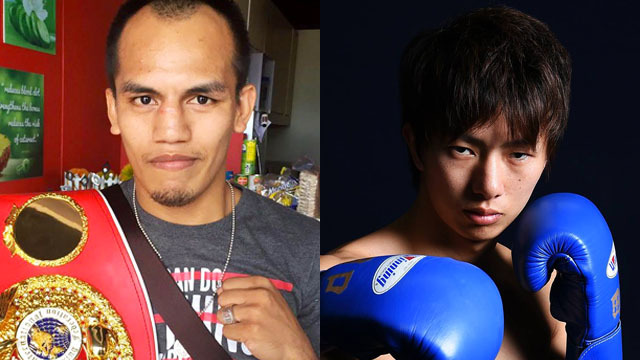 UNIFICATION. Milan Melindo will try to knock off another respected Japanese champion when he faces Ryoichi Taguchi. File photos

NEW YORK, USA – IBF junior flyweight champ Milan Melindo had said unification would be his path to carving a legacy. He’ll get his shot at doing so on New Year’s Eve when he faces WBA 108 pound titleholder Ryoichi Taguchi at Ota-City Gymnasium in Tokyo, Japan.

The fight was announced jointly by Melindo’s promoter ALA Promotions and Watanabe Promotions, which represents Taguchi, at conferences in the Philippines and Japan on Thursday, November 16.

It’ll be Melindo’s first fight back in Japan after shocking Akira Yaegashi with 3 fast knockdowns in the first round to lift the title in May, and his first time back in the ring since overcoming two bad cuts to retain the belt by split decision over Hekkie Budler on September 16 in Cebu City.

Edito Villamor, trainer of the 37-2 (13 knockouts) Melindo, tells Rappler the cuts have healed and that the 29-year-old from Cagayan de Oro City returned to sparring a week ago for what could be a career-defining fight.

“This is a great fight between two world champions and this is the dream of Milan to fight any world champions of the organizations,” said Melindo’s trainer Edito Villamor. “We need to win in every round impressively and convincingly.”

Taguchi (26-2-2, 12 KOs) has made 6 title defenses over 3 years, including a split-draw against Carlos Canizales last New Year’s Eve before stopping Robert Barrera in 9 rounds in his most recent defense in July. The 30-year-old from Tokyo has been unbeaten since losing a decision to Naoya Inoue, the current WBO junior bantamweight titleholder and one of the sport’s pound-for-pound best talents, in 2013.

The fight will be presented by ABS-CBN in the Philippines and TBS Television in Japan, Michael Aldeguer of ALA tells Rappler.

“The unification opportunities have always been in our radar as we always try to make the big fights,” said Aldeguer. “It was not easy putting this fight together but it was worth the wait.”

The announcement comes just weeks after an announcement by the IBF ordering Melindo to face Budler again in an rematch of their optional title defense. Budler’s manager Colin Nathan tells Rappler that they’re being assured of first crack at the winner of the unification fight, the first in the division since Kazuto Ioka and Yaegashi brought the WBA and WBC belts together in 2012.

The most recent Filipino boxers to become unified champions are Nonito Donaire Jr and Brian Viloria in the junior featherweight and flyweight divisions.

The other two champions in the division are Ken Shiro (WBC) and Kosei Tanaka (WBO), both of Japan. – Rappler.com