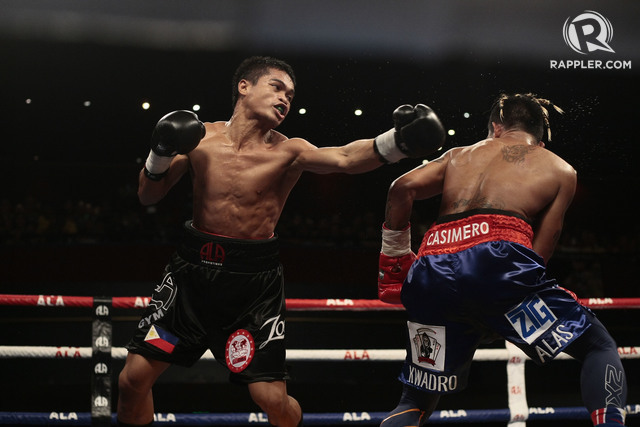 CEBU CITY, Philippines – Jonas Sultan showed the maturity and poise of a top contender as he outboxed and outfought two-time world champion Johnriel Casimero on Saturday, September 16 at Waterfront Hotel and Casino in Cebu City, Philippines.

All 3 judges scored the fight for Sultan, 117-111, 116-112, 115-113, in the 12-round title eliminator, making Sultan the number one contender for IBF junior bantamweight champion Jerwin Ancajas, and setting the stage for the first Filipino vs Filipino world title fight since 1925.

Sultan (14-3, 9 knockouts) of Zamboanga City, Philippines boxed masterfully throughout the first half of the fight, using his speed and counterpunching to keep Casimero (24-4, 15 KOs) off-balance. Casimero of Ormoc City, Philippines appeared tentative throughout, but made a fight of it in the sixth round, landing overhand rights while Sultan matched him punch for punch.

Casimero, a former IBF flyweight and WBO junior flyweight champion, landed the harder punches from rounds 7 to 9, but could not sustain offense against the disciplined boxing and counterpunching of Sultan, who cruised to the win late in the fight.

“He’s a very tough fighter, very strong but I can handle that,” said Sultan, 25, of Casimero. Sultan, when asked if he’s ready for Ancajas, he answered in the affirmative.

It was the second straight win over a former world champion from the Philippines for Sultan, who knocked out former flyweight champ Sonny Boy Jaro in 8 rounds in May.

ALA Promotions president Michael Aldeguer, who handles Sultan’s career, says a showdown with Ancajas, or whoever is the champion at that point, would not happen until next year as Ancajas (27-1-1, 18 KOs) of Panabo City made his last mandatory defense on July 2 with a seventh round technical knockout of Teiru Kinoshita and wouldn’t be due for his next one for another 7 months.

The last Filipino vs Filipino world title fight took place in Wallace Field in Manila when Pancho Villa, the first ever boxing champion from the Philippines defeated Clever Sencio to retain the world flyweight title on May 2, 1925.

“We have a big chance because Sultan is a tough fighter. He wants to win,” says Sultan’s trainer Edito Villamor about whether he can beat Ancajas, who won the title last September with a unanimous decision over Puerto Rico’s McJoe Arroyo.

Villamor credits Sultan’s “speed and quickness” for the victory, adding “we know that when Casimero backs up, he can’t punch.”

Earlier in preliminary action, Arthur Villanueva (31-2, 17 KOs) wore down Richie Mepranum (31-7-1, 8 KOs) in a battle of former world title challengers, forcing Mepranum to throw in the towel after the fourth round. Villanueva of Bago City was the much larger of the two fighters and walked the Maasim City native Mepranum down, landing with impunity to the body and head.

Mepranum has now lost 3 straight by knockout while Villanueva rebounds from his one-sided points loss to Zolani Tete this past April in a fight which eventually decided the vacant WBO bantamweight title.

Kevin Jake Cataraja (7-0, 6 KOs) remained unbeaten with a second-round knockout of Wiljan Ugbaniel (13-6-1, 4 KOs), dropping him twice in their scheduled 8-rounder to bring a halt to the fight at the 1:56 mark. The knockout punch was a straight right hand through the guard of the southpaw boxer. – Rappler.com