Sultan vs ex-world champ Sonny Boy Jaro figures to be one of the best domestic fights of the year in the Philippines, even if there’s been relatively little hype on it 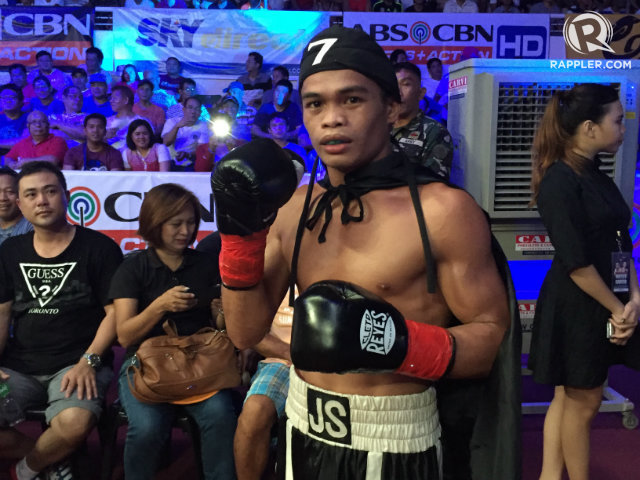 ZORRO. Jonas Sultan isn’t one of the more celebrated boxers in the Philippines, but he’s making his reputation by pulling off upsets over better-known fighters around the world. File photo by Ryan Songalia/Rappler

MANILA, Philippines (UPDATED) – If you’re a boxing fan in Manila, you’ll want to spend the afternoon at the Makati Cinema Square this Sunday, March 19.

(Note: Fight has been rescheduled to Sunday, May 7 at Angono Sports Complex in Angono, Rizal at 4 pm.)

That’s because one of the best domestic cards in some time is taking place then, even if the show is devoid of hype and television promo spots. The main event for the admission-free show will feature Jonas Sultan defending his IBF Inter-Continental super flyweight title against former WBC flyweight champ Sonny Boy Jaro in a 12-round fight.

Sultan, 25, is a rising star in Philippine boxing, though his modest 12-3 (8 knockouts) record belies his recent accomplishments. Little is known about Sultan, a Tampilisan, Zamboanga del Norte, Philippines native, because he’s not one of the fighters from the ALA stable who is featured prominently on their Pinoy Pride series on ABS-CBN.

He earned a reputation as a road warrior in 2016, scoring second-round knockouts of once-beaten favorites Tatsuya Ikemizu (in Japan) and Makazole Tete (in South Africa) to create some buzz for his career.

No one can say Sultan is a coddled fighter, and his experiences on the road have made him a hardened veteran before his time.

“It’s the same for me,” said Sultan of fighting on the road. “Because I always think in every fight of mine…I like to be always a challenger. That’s what I’m always thinking when I fight. The challenger is always hungry.”

A boxer since he was 11 years old, Sultan was put into the sport by his father, a trainer, and had a brief 12-fight amateur career (8 wins and 4 losses, he says), fighting mainly in barangay fiestas. He was able to come to the ALA Gym in Cebu City because his older brother Dondon Sultan, a long-time journeyman in the sport, was based there.

“I didn’t expect that I can be a champion. I just only like to fight for my family and to help them from poverty,” said Sultan.

He suffered two defeats by split-decision within his first 6 fights, and another decision loss in Japan to Go Onaga in 2015. That’s why Sultan relies on his powerful right hand as his judge when he fights.

“In South Africa, God gave me a great victory that time. Maybe I’ll lose if we go to 12 rounds by decision,” said Sultan.

Sultan’s second round knockout of Tatsuya Ikemizu in Osaka, Japan

Robert Eturma, the trainer tasked with preparing Sultan for fights at the ALA Gym, believes the early setbacks made Sultan a better fighter. Now, instead of preparing for fights by himself in the province, he’s mastering his footwork and speed, which Eturma considers his best assets, and submitting to the conditioning program to boost his punching power.

“He improved a lot the maturity on top of the ring. And his power to [knock out fighters with] one punch,” says ALA head trainer Edito Villamor.

And what about the costume he wears when walking to the ring, the concealing black bandana and cape which embellish his entrance and make his “Zorro” nickname work? Does he see in himself the masked crusader who carves up opponents like Don Diego de la Vega, leaving an S instead of a Z on the chests of his foes?

“I don’t think so,” said Sultan, a married father to two daughters, a one-year-old and a 3-year-old. “Only my manager [ALA founder Antonio Aldeguer] gave me the name of Zorro. Maybe it’s all about my style.” He figures he’ll hang on to the nickname for the time being. “For now I like Zorro because I started with the name of Zorro. Just like a speed fighter.”

Jaro (43-13-5, 30 knockouts) is no soft opponent at home. The 34-year-old has won his last 9 fights, and in 2012 ended the long flyweight championship reign of Thailand’s Pongsaklek Wonjongkam, knocking him out in the sixth to become champion. Jaro is a heavy puncher who has fought 6 world champions and represents the biggest challenge so far for Sultan.

“This is the biggest test for Jonas because Jaro is a former world champion and experience fighter,” said Villamor. “This is hard for him but Jonas is 100 percent ready.”

“Not so sir,” said Sultan of whether Jaro is a threat to him. “Just I know what I am going to do for our fight. I go for the win.”

He’s currently rated number 14 by the IBF and hopes a win on Sunday will get him on the radar of other world champions.

Update on 5:51 pm Friday: Jaro has withdrawn from the fight after being declared unfit by his physician due to a “severe infection,” according to event promoter Anson Tiu Co. Heno vs Ganoza will now be the main event.

Update on Thursday, May 4: Fight has been re-scheduled for Sunday, May 7 at Angono Sports Complex in Angono, Rizal. – Rappler.com

Ryan Songalia is the sports editor of Rappler, a member of the Boxing Writers Association of America (BWAA) and a contributor to The Ring magazine. He can be reached at ryan.songalia@rappler.com. Follow him on Twitter @RyanSongalia.