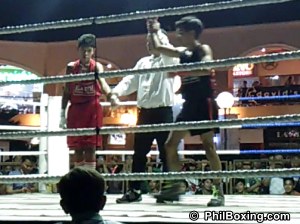 A tradition that has long been in existence once again unfolds as ALA Promotions staged a boxing event for this year’s Sinulog celebration. Twelve pairs of young up-and-coming boxers from different areas in Cebu showcased their fistic talent to a sizeable crowd that showed up at the carpark of Gaisano Country Mall. A threat of heavy rainfall didn’t deter the aspiring open boxing pugs to go all out for the victory as the day has seen erratic weather conditions.

Fifth bout saw Christian Gabriel Gingoyon of Lapu-Lapu City/ 10,000 BC Boxing Club victorious anew against Erick Miguel Austria of Cabancalan in 38 kgs via UD, King Justy Ala Villamor of Mandaue City defeated Emerald Pishko of 10,000 BC Boxing Club via UD, Ramil Castanares of Mandaue registers the only stoppage win of the night with a TKO in the third stanza over Phil-Aust Boxing Club’s Rey Abesia. A strong blow to the head puts Abesia on his back and when he tried to stand up quickly, he staggers back which prompted referee Alex Consigna to immediately call a halt to the bout.

Pomar brothers, Marvin and Marco both of UV boxing team, experienced contrasting fate as the former wins over Benny Magsayo via UD while elder brother Marco lost his bout against Alex Santisima.

Also on hand to witness the event were unbeaten Moleney twins, Andrew and Jason. Both are currently training at the ALA Boxing Gym in Talamban. The bantamweight/ junior featherweight prospects from Victoria, Australia are gearing for a tough fight against Filipino contenders Renoel Pael and Marco Demecillo, respectively in Land Down Under this February 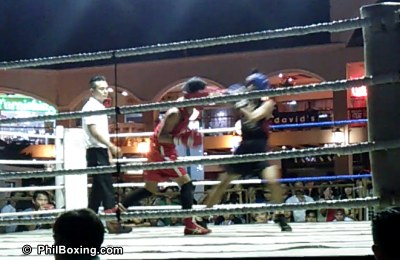 King Justy Ala Villamor throws a left against Emerald Pishko. 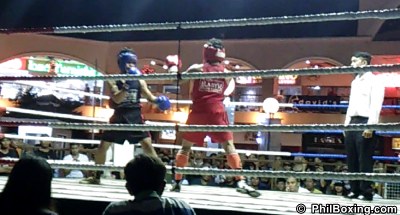