ALA PROMOTIONS KEEN ON SIGNING UP MARLON TAPALES

ALA PROMOTIONS KEEN ON SIGNING UP MARLON TAPALES 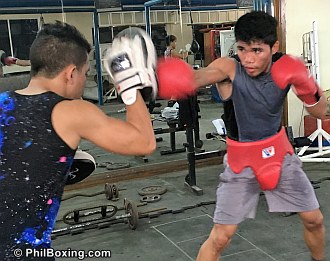 ALA Promotions matchmaker and former title challenger Edito “Ala” Villamor discussed the possibility of signing up Tapales, win or lose against Pungluang, with the manager of the talented southpaw in Rex “Wakee” Salud.

The youthful ALA president in Michael Aldeguer, who has launched successful international fight cards in the United States and Dubai, is pursuing a growing international expansion program and wants to promote fighters from different stables not just in the Philippines but from all over the world.

In its recent fight card at the San Mateo Events Center in California, several US-based fighters figured in the promotion headlined by previously unbeaten Prince Albert Pagara, who lost by a stunning eighth-round knockout to rugged Mexican Cesar Juarez.

Tapales, who faces Pungluang in the historic city of Phra Nakhon Si Ayutthaya some 85 kilometers north of Bangkok, told Manila Standard, he is ready to give his best shot and is in fine condition and just right after a long preparation.

Tapales said he is “mentally and physically prepared and ready to fight,” indicating that after watching several of the Thai champion’s fight tapes he was “ready to fight and we have a chance for sure.”

Trainer Brix Flores said he believes Tapales “is one of our best boxers . His skill and talent are world clasS” while well-known promoter Salud thinks Tapales “is the best boxer in the Philippines right now.”


More from my site