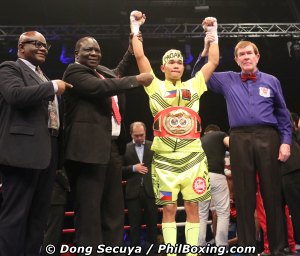 IBF Intercontinental super bantamweight champion Prince Albert Pagara will headline ALA Promotions initial foray into the highly competitive US market in a fight card at the popular StubHub Center in Carson City, California on October 17.

ALA Promotions president Michael Aldeguer told the New Standard/boxingmirror.com that he is “looking for a name fighter” to challenge the 21 year old Prince Albert who is coming off a crushing 1st round TKO over Mexican Jesus “Chito” Rios who was not just overweight but also over-matched although the predominantly Filipino crowd at the International World Trade Center in Dubai enjoyed the demolition which came at 2:00 minutes of the opening round.

Prince Albert who first broke into the WBC rankings at No. 12 has quickly moved up to No. 10 while remaining at No. 5 in the IBF world rankings.

Aldeguer said the exciting Mark “Magnifico” Magsayo who lived up to his moniker by putting on a magnificent performance to score a smashing 5th round knockout of rugged Mexican slugger Rafael Reyes before a huge crowd of wildly cheering fans at the Waterfront Hotel and Casino on last July 11 will also be featured on the inaugural US venture.

The 21 year old Magsayo from Tagbilaran City, Bohol who has been hyped as a genuine world title prospect, had earlier engaged five division world champion Nonito “The Filipino Flash” Donaire in some torrid exchanges during sparring at the ALA Gym as Donaire also prepared for a fight in Macau in which he destroyed former European champion Antony Settoul in two rounds on July 18.

Magsayo looked ripped and readsy and oozing with confidence but the blue chip prospect had his hands full against a tough opponent in a battle for the IBF Youth featherweight title in an action-packed affair while it lasted with Reyes refusing to back down.

After a terrific opening round in which both fighters traded some big hooks Magsayo scored a knockdown in the 3rd round in a confusing sequence as Reyes tried to complain about a supposed low blow, forgetting the time-honored tradition of protecting yourself at all times and paid the price.

Magsayo, quickly found his rhythm and began to throw vicious combinations as he went for a knockout which came his way during a three-punch combination capped by a perfectly timed, uppercut that dropped Reyes who spat out his mouthpiece as referee Abainza correctly called a halt to the bout at the 2:29 mark.

Aldeguer informed us that there is no word yet on whether Prince Albert’s elder brother, junior welterweight Jason Pagara who suffered a cut over his left eyelid in his clash with Mexican Ramiro Alcaraz would be ready for the October 17 card.

Pagara, who is ranked No. 2 by the WBO had a much harder time against Alcaraz before winning by an 8th round technical decision when the ringside physician ruled that a nasty cut suffered by Pagara above his left eyelid following an accidental clash of heads in the opening round, worsened as the fight wore on and blood streamed from the cut to blud his vision, forcing the referee to stop the contest on the recommendation of the ringside doctor.

Two good right hands and a stinging left by Pagara in the second round and a left hook that shook Alcaraz towards the end of the round helped Jason overcome the awkward style of the Mexican southpaw who continued to create problems as he moved around and targeted the cut.

A low blow by Pagara caused a break in the action before another clash of heads worsened the cut on Pagara’s eyelid which caused the stoppage with all three judges scoring the bout for the Filipino.

British judge Robert Dale Bridges had Pagara the winner 78-72 while Filipinos Dan Nietes and Greg Ortega both scored it for Pagara 76-74.