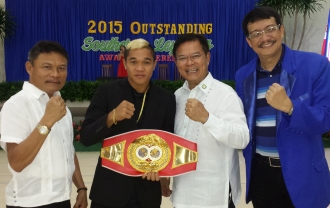 In the occasion of the 55th Southern Leyte Founding Anniversary, International Boxing Federation intercontinental super bantamweight champion Prince Albert Pagara was one of the four awardees as Outstanding Southern Leyteño.

Pagara was awarded as a Young Achiever in the field of sports and was nominated by this writer. I enumerated his boxing records including the immaculate amateur fights when I introduced him.

His award was given by Gov. Roger Mercado, Cong. Damian Mercado, Board Member Atty. Abelardo Almario and this writer.

Prince Albert was undefeated in all his 400 amateur fights and won titles in 65 boxing tournaments he participated. He turned professional at the age of 16 and has since amassed 23 wins with 16 KO’s, no defeat, no draw.

Pagara is rated No. 7 by the IBF, No. 8 by BoxRec and No. 9 by The Ring Magazine in the whole world.

He was born 21 years ago in Barangay Lib-og, Maasin City, Southern Leyte to mother Sabrina Herugalem and father Reynaldo Pagara.