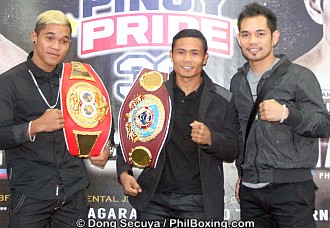 The awards won by the boxing stars in “Pinoy Pride 30” have inspired the three boxing stars who headline the event, regarded as one of the biggest fight cards in recent years at the Smart Araneta coliseum on Saturday. May 28.

Trainer Edmund Villamor who has been named “Trainer of the Year” for the third time told the New Standard/Viva Sports that all the ALA awardees including “Hall of Fame” inductees Donnie Nietes, the longest reigning Filipino WBO light flyweight world champion and five division world champion Nonito “The Filipino Flash” Donaire who will be fighting under the ALA Promotions banner in collaboration with 1 Day Banner for the first time thanks to an agreement worked out by ABS-CBN with Top Rank promoter Bob Arum since the giant broadcast network carries all Donaire’s fights, are inspired by their prestigious awards.

Among the winners are Prince Albert Pagara, the undefeated reigning IBF Intercontinental super bantamweight champion who has been named the “Most Promising Boxer” and the youthful president of ALA Promotions Michael Aldeguer who has once a gain been named “Promoter of the Year.”

Villamor said Nietes is “fully prepared even if the fight is today” after watching several tapes of the fights of his Mexican opponent Gilberto Parra who has an impressive record of 17 knockouts in 19 wins with just 2 losses.

The trainer noted that despite his KO record Parra is “not very strong” and scores knockouts because of his “volume of punches.”

He said they will initially “study his style and adjust” depending on whether Parra “is the aggressor or he decides to run” stating that “we are ready no matter what he brings.”
The soft-spoken Nietes said Parra “is good and is a knockout artist who hits hard” but that he is than ready to retain his title and added , “my confidence is very high” after a rigorous training program which was taken to a higher level.
In the case of Pagara who battles Rodolfo “Fofo” Hernandez (26-5, 1 with 24 knockouts) Villamor said they are “not taking any chances because Pagara can’t be complacent against a knockout artist who is good.”

Pagara who Villamor said has “a great future because he is only 21 years old and has shown great skill, power and speed” has engaged in some heavy sparring with Donaire, Roli Gasca, Mark “Magnifico” Magsayo and even the much heavier Jimrex Jaca.
Pagara told us “sparring has been like an actual fight so we can be ready for our opponent.”