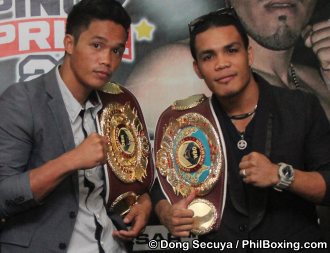 CEBU CITY – ALA Promotions formally launched the 29th edition of PINOY PRIDE which is set for Davao City this February 7, 2015. The event billed as “FIST OF FURY” will be headlined by Jason “El Niño” Pagara’s defense of his WBO International junior welterweight title against Cesar”El Dolar”Chavez of Mexico. Pagara (34-2,21KO’s) is ranked number four by the WBO and is keen on showcasing his skills in the U.S should he hurdle Chavez.

ALA Promotions President and CEO Michael Aldeguer stated that this fight will be used to assess at what point Pagara is in his career. “We have to know where he (Jason) is at. If he does well, he will campaign in the U.S. against bigger names.”

Chavez is a former Mexican Pacific Coast lt.welterweight titlist and has a record of 23-7,11KO’s. Pagara is keen on giving an impressive showing and is very much aware that he is in a very competitive division. “I know who are the big names but I will fight them anytime, any one of them.” Pagara said. 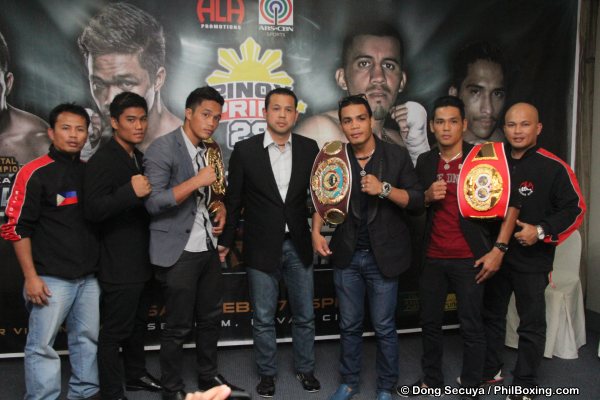 Pagara mentioned the name of the undefeated Jessie Vargas, who has the WBA light welterweight title, as one of the opponents he would like to face.

The co-main feature is the WBO Intercontinental jr. featherweight title bout between defending champ Genesis “Azukal” Servania (25-0,11KO’s) and Mexico’s Juan Luis “Perla Negra” Hernandez (17-3-1,9KO’s). The unbeaten Servania is the top ranked contender of the WBO and is headed for a tough battle should he face WBO/WBA world champ Guillermo Rigondeaux of Cuba.

Servania said that Rigondeaux will be tought but he believes that he has a chance. “As long as he doesn’t run”. Servania stated.

Villanueva is aware that his last two fights have not been very impressive and he has something to prove. He said that a loss could end his career. He has remained unbeaten at 26-0,14KO’ and is ranked by the four major sanctioning bodies.

PINOY PRIDE 29’s press conference was held at the Rajah Park Hotel in Cebu City. The first PINOY PRIDE event in Davao was on April 20,2013 when Rey “BoomBoom” Bautista lost to Mexican Jose Ramirez. The fans support and unbridled enthusiasm made ALA Promotions decide to stage another big event at the USEP Gym.


More from my site