Milan Melindo gets another shot at world title – report

Milan Melindo gets another shot at world title – report 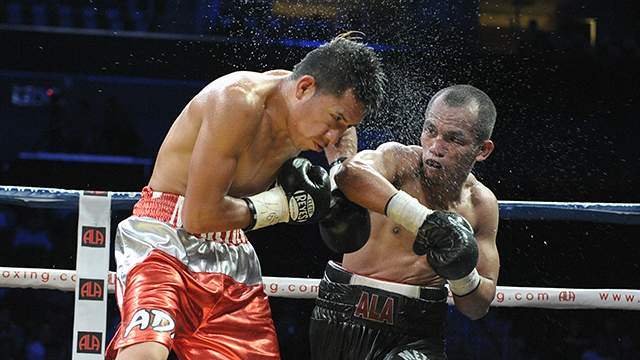 Milan Melindo lands a right hand on Martin Tecuapetla during his bout in May 2014. File photo by Denmark Delores

MANILA, Philippines – Filipino pugilist Milan Melindo will get another crack at a world championship as he is one of the potential candidates to vie for the International Boxing Federation (IBF) light flyweight title.

According to a report by veteran journalist Ronnie Nathanielsz, ALA Promotions president Michael Aldeguer is currently under negotiations with Fernando Beltran of Zanfer Promotions to stage the bout between Melindo and current titleholder Javier Mendoza in Manila on March 28.

However, the venue of the championship clash remains unknown as of the moment.

It will be the second championship bid for Melindo (32-1, 12 knockouts) as he was given an opportunity to compete for a world title in July 2013 when he challenged Juan Francisco Estrada for the World Boxing Association (WBA) and World Boxing Organization (WBO) flyweight straps, but he bowed to his Mexican counterpart via unanimous decision.

The 26-year-old native of Cagayan de Oro City, Misamis Oriental bounced back from the disappointing setback to Estrada by capturing the vacant WBO International flyweight belt against Jose Alfredo Rodriguez in November 2013 before successfully defending it against Martin Tecuapetla 6 months later.

Melindo opted to move down to light flyweight in November 15, 2014 when he faced Saul Juarez in an IBF title eliminator, where he came out on top by unanimous decision.

Although Melindo is the mandatory challenger on paper and his camp is currenly in talks with Zanfer Promotions, Mendoza is scheduled to defend the aforementioned IBF belt against Columbian fighter Mauricio Fuentes on January 10, as indicated on the champion’s profile on BoxRec.com.

In addition, Mendoza has never fought overseas and is riding high on a 9-fight winning streak since yielding to Jorge Guerrero by second-round technical knockout in July 2011.

Aside from the Melindo-Mendoza pairing, ALA Promotions publicly confirmed on Tuesday, January 6 that the 29th installment of Pinoy Pride is set to happen on February 7 in Davao City.

The fight card is headlined by Jason Pagara putting his WBO International junior welterweight title on the line against Cesar Chavez.