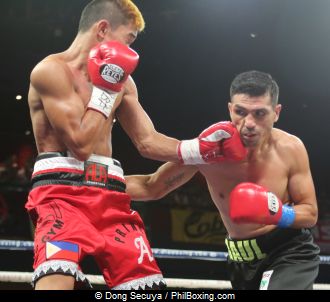 For bringing the name of the place where he was born Maasin City in Southern Leyte and successfully defending his International Boxing Federation intercontinental junior featherweight title against tough Mexican challenger Raul Hirales, Albert Pagara will be awarded by the City Government of Maasin.

The occasion will be during the city employees Christmas party on Friday, December 19 at the Maasin City Gymnasium. Before that, a holy mass will be held, then the blessing of the newly renovated city hall then the motorcade around the poblacion area for the IBF titlist regarded as a celebrity in his home city.

After the party will be the homecoming for Albert with his relatives at Barangay Lib-og where he was born. He will be welcomed by his uncle Punong Barangay Walter Sepe and his constituents. He will be honored also in his own barangay where he started to learn the basics of boxing.

Last August 10 during the 13th City Charter Day, the younger Pagara was also awarded as Outstanding Maasinhon in the field of sports. That was right after he demolished another Mexican Hugo Partida in the very first round to win his title belt. Albert sat beside keynote speaker MMDA chairman Francis Tolentino in a media press conference after the anniversary luncheon.

Regarded by his kababayans as a potential successor to Manny Pacquiao, Pagara fought five times in Maasin City and every bout attracted a fullhouse crowd. The fights were billed as “Maasin Pride” to complement the very popular “Pinoy Pride” series where Albert was featured several times.

His attendance during the honoring and awarding ceremony was already approved by ALA Gym owner Antonio L. Aldeguer. He is scheduled to fight in Macau on February 14 next year together with Donnie Nietes against another Mexican in his first international title fight outside the country.