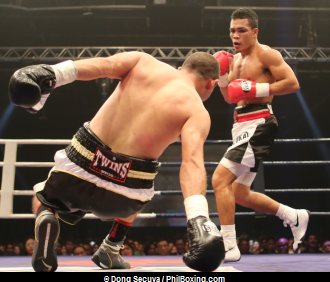 SAN JOSE, CA – In the fallout of the failed Rigondeaux-Avalos mandatory title fight, the WBO has mandated Filipino Genesis Servania (25-0-0, 11KO), the No. 2 ranked contender in the WBO super bantam division, to fight for the Interim Title against any available opponent within the ranked contenders, this developed during the Ratings and Championship Committee meeting last Thursday at the 27th WBO Convention held at the Caesars Palace Hotel in Las Vegas.

WBO and WBA champion Guillermo Rigondeaux (14-0-0, 9KO) alias ‘The Jackal’, the highly avoided Cuban boxing specialist, won the purse bid to fight mandatory challenger Chris Avalos (24-2-0, 18KO) on Sep. 19, 2014. Top Rank, Avalos’ promoter, however, informed the WBO on Sep. 26 that Avalos will pass by Rigondeaux, pursuing instead a fight with IBF champion Carl Frampton (19-0-0, 13KO) of the United Kingdom to which Avalos is also the mandatory challenger. Top Rank previously promoted Rigondeaux but let him go after Rigondeaux’s contract expired after the Cuban’s last fight in Macau on July 19, 2014 against Thailand’s Sod Kokietgym which the Cuban won by 1st round knockout.

“We are happy and accepted the WBO offer, but we’re going to discuss it with the team and then talk with the other camps,” ALA Promotions Vice-President Dennis Canete, who promotes Servania, told Philboxing.

Servania last fought at the World Trade Center in Dubai against Jose Cabrera (22-5-2, 10KO) of Mexico winning by 10th round technical decision.

If the Servania camp could not find an agreement with the other contenders to fight for the Interim Title, the WBO will push the opportunity down the ladder. However, whoever wins the Interim Title, may have the specter of facing ‘The Jackal’ from Cuba, a high risk low reward proposition whom everyone – from TV networks, promoters, boxers and even fans – seem to have avoided.