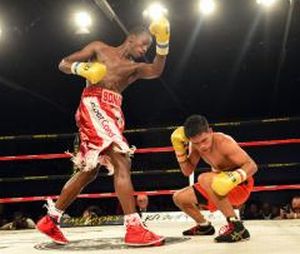 Challenger Roli Gasca discovered that giving away almost five pounds to IBO junior featherweight champion Thabo Sonjica was too much as he lost a chance to win the title which was stripped from the South African who failed to make the weight for their clash at the Emperors Palace in East London last Sunday, Manila Time.

South African media reported that in the end the rangy Sonjica emerged a runaway winner from his mismatched and downgraded fight with diminutive Filipino Roli Gasca but without his International Boxing Organisation (IBO) junior featherweight title.

In a bizarre turn of events, Sonjica was stripped of his title even before entering the ring after stepping on the pre-fight scales a substantial two kilograms above the junior featherweight limit.

All three South African judges had Sonjica a comfortable winner with two judges scoring it for Sonjica116-109 and the third judge 117-109.

Super Sport said Sonjica emerged winner in what it described as “an absorbing confrontation in which both boxers hit the canvas for counts of eight, and the over-powered Gasca was a good head shorter in height than his opponent.”

The widely read site noted that the chain of disappointment began on Friday when Sonjica failed to turn up at the official weigh-in for the Emperors tournament, with a message received from his handlers in East London claiming they had missed their flight to OR Tambo International Airport and were striving to get onto a later flight.

A special, unusual weigh-in ceremony was arranged when the East London contingent ultimately arrived but to little avail when it was found Sonjica was above the junior featherweight limit, with reports he had been even heavier at one stage in a vain attempt to make the weight.

Gasca gave the impression he belonged in a division lower than junior featherweight and the South African clearly geared to fight in a heavier division.

Sonjica won the IBO title with a 6th round TKO of another Filipino, former WBC Silver champion Sylvester Lopez in July last year.