ALBERT PAGARA, THE NEXT MANNY PACQUIAO

ALBERT PAGARA, THE NEXT MANNY PACQUIAO 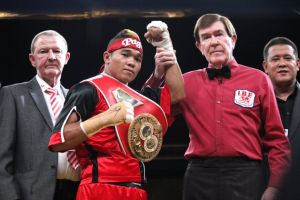 Albert Pagara had an excellent boxing stint at Cagayan de Oro City being undefeated in all his amateur bouts. While his father Reynaldo is from CDO, he was born in Maasin City, the place of his mother, where he learned the basics of boxing.

During the interview of both siblings after stopping their respective opponents in Pinoy Pride 26, Jason admitted that Albert had a better amateur record than him. Antonio L. Aldeguer was also impressed of Pagara’s complete dominance of Hugo Partida, his first Mexican opponent, and rated No. 14 in the world by the World Boxing Council being the WBC FECARBOX Champion.

The International Boxing Federation intercontinental junior featherweight championship belt was the first ever title belt won by the younger Pagara. “How sweet it is to wear a champion’s belt,” uttered The Prince atop the ring.

Pagara has a 71% knockout rate and in his 21 immaculate bouts only 6 went the distance. He passed his first acid test with flying colors getting rid of the fiery Mexican in just 78 seconds by letting him kiss the canvas three times.

The plan to send Jason to the United States to train will now include Albert as ALA Gym saw a brighter future in the 20-year-old sensation. Sparring with Mexicans and Americans would further develop the skills of the fighting siblings.

Boxing experts observed the KO prowess of Prince Albert which tends to improve at almost every bout. He has now stopped five of his foes in the first round, four opponents were KO’d in the second round, five lasted only up to the third round, and one by 4th round TKO. The six bouts that went the distance were all by unanimous decisions.

Many believed that had Prince Pagara continued his illustrious amateur career which did not encounter any loss, would have led him to an Asian Games gold medal or even an Olympic medal.

But destiny has other plans for the Maasin City kid. With adequate U.S. training, he could be the heir apparent of Manny Pacquiao. He has the guts, determination, power and showmanship found in The Pacman.

The Prince should not be in a hurry though to become the King. He is only aged 20 and the boxer at the top of his junior featherweight division by The Ring is Nonito Donaire nemesis Guillermo Rigondeaux of Cuba, also the WBO and WBA champion.

Next in rank is British Carl Frampton and American Leo Santa Cruz, the WBC champion. All three boxers are all undefeated. Rated No.4 is IBF champion Spanish Kiko Martinez.

Give Albert more time to mature and he will reach the top of his division.