ALA PROMOTIONS ‘DUEL IN DUBAI’ PROMISES TO BE A DANDY 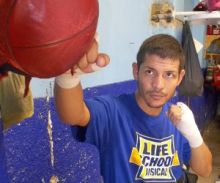 Jose ‘Matador’ Cabrera.
Riding the crest of its tremendously successful staging of “Pinoy Pride 26” at the Waterfront Hotel and Casino last Saturday when the Pagara brothers, Jason and Prince Albert put on a scintillating performance before a sell-out crowd, ALA Promotions is taking its act to Dubai on August 29 in cooperation with The Filipino Channel or TFC of the giant broadcast network ABS-CBN.

The event which will be held at the World Trade Center has the wholehearted support of Dubai Tourism.

In a ten round junior lightweight clash, the charismatic Rey “Boom Boom” Bautista who was mobbed by Filipino fans the last time he fought in Dubai will clash with strong and resilient Mexican Juan Jose “Piquet” Martinez who has an awesome record of 15 knockouts in 19 wins with only one defeat.

Martinez is the reigning WBC Mundo Hispano champion having won the title by a unanimous twelve round decision in a thrilling ring battle with Carlos Jimenez last March 29.

Mexican media reported that Martínez conquered the Hispanic title over Carlos “Torito” Jimenez in a thriller in a fight which was described as the highlight of the card “Dinamita en la arena San Juan” with “Piquet” Martínez y “Torito” Jiménez engaged in an emotive slugfest.

The reports said Martinez was floored hard in the first round, but bravely got back up, recovered and achieved payback, sending his rival to the canvas in the seventh round.

After having survived the knockdown, Carlos Jimenez came from behind to have a great closing round that brought the fans to their feet.

In the last round it looked that Martinez was going to lose by KO, but he thrillingly dug deep to exchange a hailstorm of punches and win the round. At the end with the fans in a state of high drama and great excitement, Martinez was announced as the winner by with scorecards of 114-113, 115-111 and 115-111.

In another fight that promises to be a fierce battle, undefeated “King Arthur” Villanueva will take on Nicaragua’s Henry “El Crespo” Maldonado who is coming off an impressive 5th round knockout of Bayardo Ramos to win the vacant WBO Fedebol super flyweight title last February 28.

The 26 year old Maldonado has a record of 18-3 with 13 knockouts while the 25 year old Villanueva had a record of 25-0 with 14 knockouts and is coming off a ten round unanimous decision win over Fernando Aguilar last March 1, 2014 after scoring a spectacular 1st round knockout over Edgar Martinez to win the vacant WBO International super flyweight title on October 26, 2013.